Phenotypic plasticity is the ability of an organism to change its morphology, physiology, or behavior in response to environmental change.

A common form of phenotypic plasticity is an Inducible defense, which typically involves an individual’s altering its behavior, life history or morphology in response to predation risk. Rana pirica frogs tadpoles acquire a unique bulgy body when they develop in close proximity to predatory larvae of Hynobius retardatus salamanders (Kishida & Nishimura 2004). Expression of the bulgy phenotype by R. pirica tadpoles effectively prevents them from being swallowed by the larvae, which are gape-limited predators. 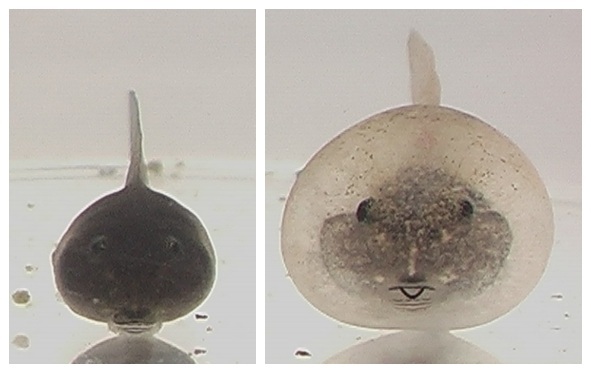 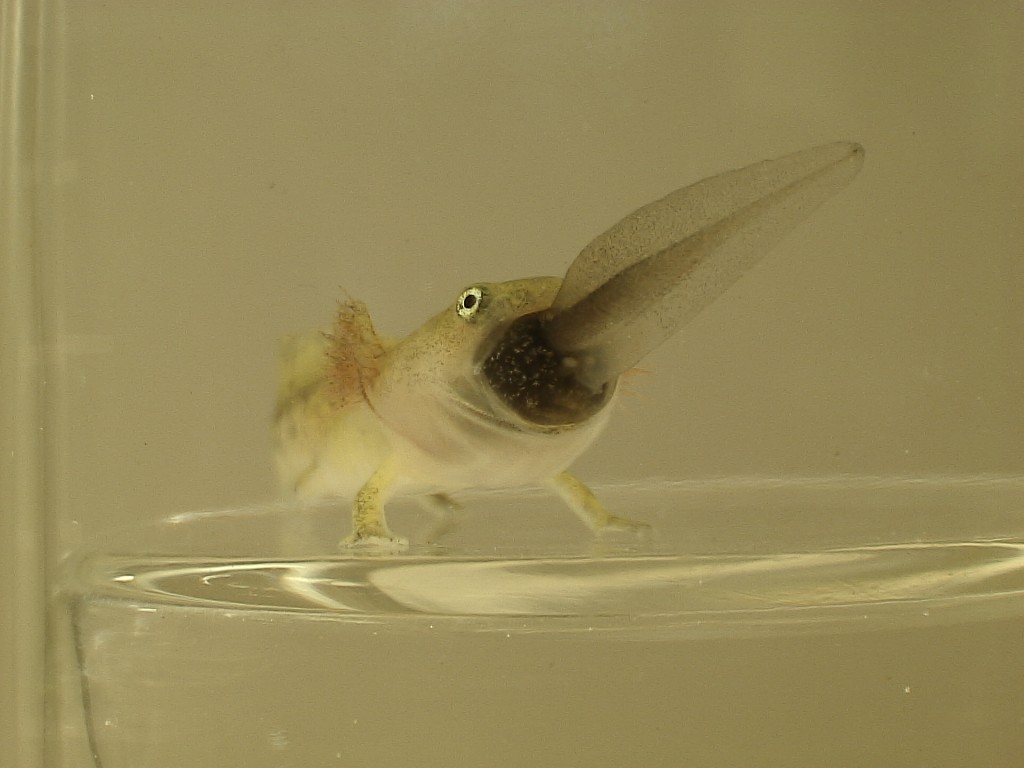 Prey organisms need to use different defensive tactics against predators that employ different hunting methods. We think that Rana pirica tadpoles use phenotypic plasticity in just this way, because they can not only acquire a bulgy phenotype as a defense against the larval salamanders, they can also acquire a “high-tail” phenotype in response to predation risk from dragonﬂy (Aeshna nigroﬂava) larvae, which bite their prey instead of swallowing it whole.  We interpret these predator-specific phenotypes as predator-specific defenses (Kishida & Nishimura 2005). 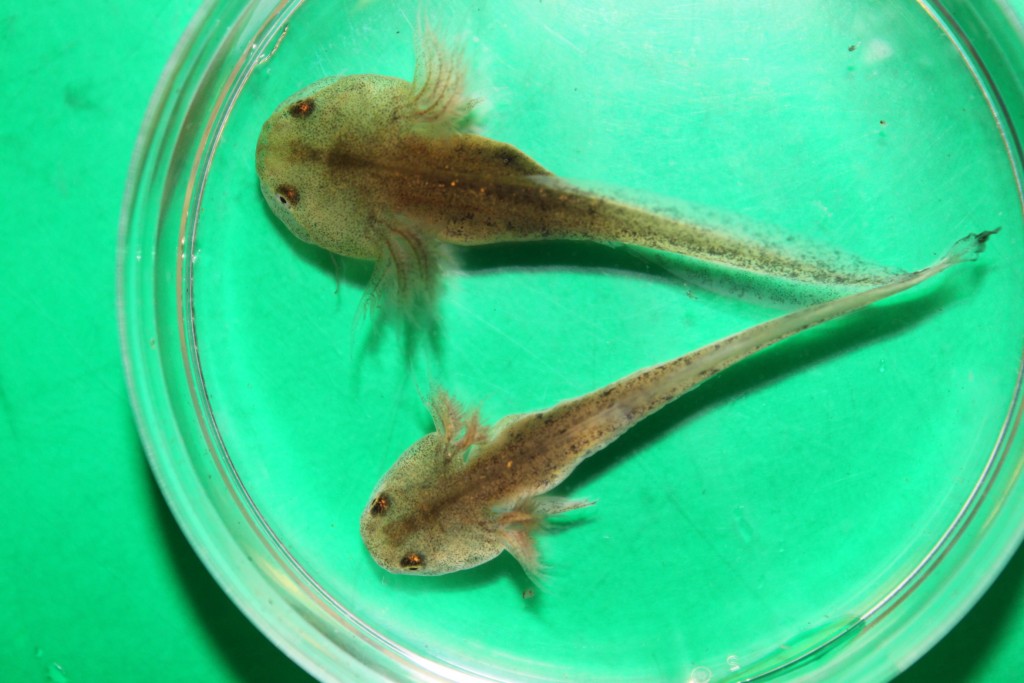 Geographic variation of inducible defenses and its genetic basis

To deepen our understanding of the evolution of inducible defenses, we examined genetic variation and geographic differentiation in the inducible bulgy defense of R. pirica tadpoles (Kishida et al. 2007). We crossed frogs from a mainland population where there were predaceous salamanders with other mainland frogs or with frogs from a population from an island without predaceous salamanders, and we also crossed frogs from the island population with other island frogs. Then we raised the resulting offspring in the presence or absence of H. retardatus salamander larvae. We found that tadpole offspring of mainland frogs were better able to express the inducible morphology (i.e., they acquired a more bulgy body) than the offspring of frogs from the predator-free island. In addition, expression of the bulgy morph by mainland-island hybrids and expression of the bulgy morph in mainland–island hybrids was intermediate between the phenotypes produced by the pure crosses. In this experiment, the expression of the bulgy morph was the same whether the mother or the father came from the mainland population. These experimental results support our hypothesis that geographic variation in the inducible defenses of R. pirica reflects the additive effects of autosomal alleles that differ depending on a population’s historical exposure to H. retardatus salamanders. 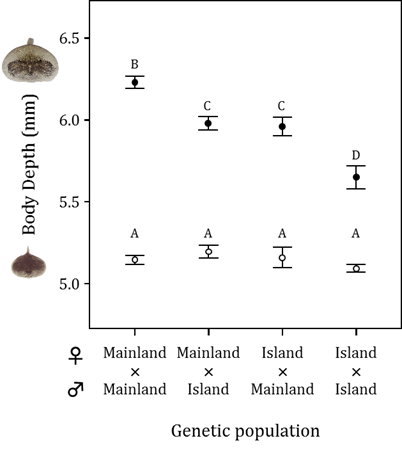 An adaptive phenotypic response to predation can impose a new challenge on a prey species.  How do organisms cope with the new challenge? The dragonfly, A. nigroﬂava, preys on H. retardatus salamander larvae as well as on frog tadpoles.  These larvae sometimes exhibit a surfacing behavior in order to take in oxygen from the air, but they surface less frequently in the presence of a dragonfly predation risk, because surfacing makes them conspicuous to this visual predator. To compensate for the unavoidable cost (hypoxia) associated with this induced behavioral defense, the salamander larvae develop enlarged gills (Iwami et al. 2007). Interestingly, gill enlargement is induced in response to not only hypoxic conditions but also chemical cues from the dragonfly. This finding suggests that organisms may evolve functional interactions among multiple inducible traits that allow them to cope with the variable nature of the selective environment.

A dragonfly preying on a salamander larva 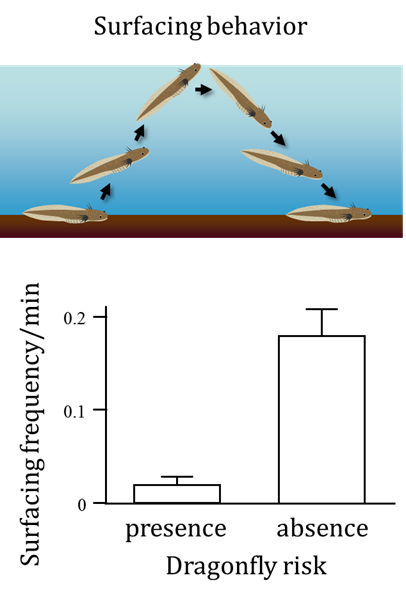 Surfacing frequency of Hynobius retardatus salamander larvae in the presence (left) and absence (right) of a dragonfly predation risk (from Iwami et al. 2007).

The salamander larva on the left was not exposed to predation, whereas the one on the right was exposed to a predation risk from dragonflies.

Reference: Iwami T., Kishida O. & Nishimura K. (2007) Direct and indirect induction of a compensatory phenotype that alleviates the costs of an inducible defense. PLoS one 2:e1084.

Surviving in a cannibalistic environment: growth and developmental acceleration of pre-feeding salamander hatchlings

In many fish and amphibian species, vast numbers of embryos may hatch at the same time. This may cause the hatchlings to be exposed to intensive cannibalism by conspecifics (members of the same species). How do hatchlings survive this vulnerable early life stage?

The ability  of an H. retardatus salamander larva to successfully cannibalize its conspecifics is highly dependent on its gape width (how wide it can open its mouth)  relative to the head width of its conspecifics. Similarly, its ability to escape cannibalism depends on its head being too wide for it to be easy prey for conspecifics. This means that the faster a hatchling grows before it begins to feed, the more likely it is to survive later conspecific interactions. To test this hypothesis, we reared salamander hatchlings alone or with conspecifics. Those reared with conspecifics became larger and developed faster than those reared alone, they started feeding sooner, and they could swim faster. This is experimental evidence of adaptive acceleration of growth and development of hatchlings in the pre-feeding stage. Next, we performed predation trials to demonstrate the advantages of early growth and developmental acceleration in cannibalistic interactions. Compared with the hatchlings reared alone, the hatchlings reared with conspecifics were more successful at cannibalizing smaller hatchlings and were also much less likely to be cannibalized themselves by larger conspecifics. Because salamander larvae that cannibalize other larvae in their early developmental period exhibit rapid growth and metamorphose early and at a larger size than non-cannibalistic individuals, growth and developmental acceleration are likely key mechanisms for life history success. 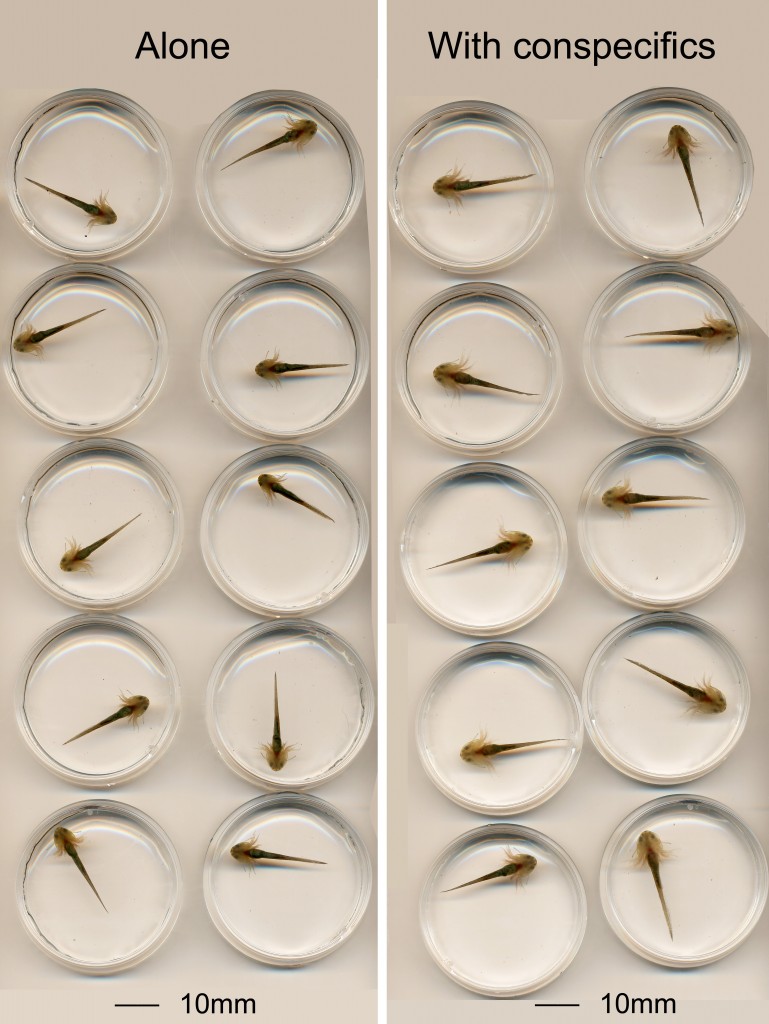 Seven-day-old H. retardatus hatchlings reared alone (left) and with conspecifics (right)(viewed from below)